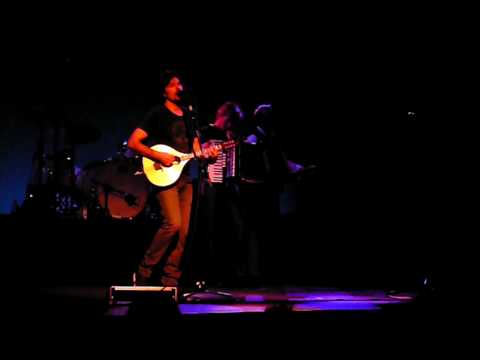 The recording of Songbook...

I’ve been listening to Songbook a lot lately, it’s entered a more regular rotation in recent months, possibly due to the intimate feel of the album. I was lucky enough to see Chris on that tour in Manchester, UK, and it remains probably my favourite ever gig.
But back to the Songbook album.
All of the 16 live recordings (I’m not including ‘The Keeper’) were made over the span of April 10th – 30th, across 9 different shows in April 2011:
Keswick Theatre, Glenside PA, April 10 – 2 Songs
Borgata Hotel Casino & Spa, Music Box, Atlanta, April 15 – 1 song
Sixth & I Historic Synagogue, Washington DC, April 17 – 2 songs
Queen Elizabeth Theatre, Toronto, April 20 – 5 songs
Vic Theatre, Chicago, April 22 – 1 song
Pabst Theatre, Milwaukee, April 23 – 2 songs
Fitzgerald Theatre, St. Paul, April 24 – 1 song
Esplanade Arts & Heritage Centre, Medicine Hat, Alberta, April 27 – 1 song
Red Robinson Show Theatre, Vancouver, April 30 – 1 song
After looking on setlist.fm, the average number of songs performed (of which some awesomely included TWO encores) averaged around 23-25. Obviously, this would be overkill for an album, but I found it really interesting which songs were chosen.
Including a few covers, like Imagine and Thank You, and songs which span Cornell’s entire career through Soundgarden, ToTD, Audioslave, and solo songs, seems like putting something in there for everyone – but after looking though some of the frequent choices on those tour dates, there are some amazing songs that didn’t seem to make the cut.
Over those 9 shows, some of songs that were played frequently on that stage of the tour, which I think would’ve made great choices for Songbook (or a Songbook II) were:
When I’m Down
Seasons
Hunger Strike
Say Hello 2 Heaven
Sunshower
Dandelion
Be Yourself
Sweet Euphoria
And it got me wondering: if these shows were all recorded with producing a live album in mind, then recordings of these shows must exist in high quality somewhere. Probably unmixed, and maybe there were some songs that were cut as it was felt the performances weren’t album worthy…but I still think it would be great to hear.
I’ll include a link to a beautiful performance of Sweet Euphoria from The Orange Peel in Asheville, which was actually on April 6th, just before recordings for Songbook began.
https://www.youtube.com/watch?v=M9txDtZa2kI
I included this due to the high quality, but I’m sure the gigs over the following weeks were just as good – and it leaves me with a few questions, if anyone wants to discuss…
How the songs were chosen?
How/why the dates/performances were chosen?
What happened to the recordings of the songs that didn’t make the final cut?
Cos it sure would be beautiful to hear them one day.

Chris Cornell Spotify Playlist I made a few months ago

สถานบันเทิงทั่วไป ใน Atlantic City, NJ The Music Box. Get closer to concerts in AC than you ever have before! You can't help it at this small but splendid theater where big names from every genre take the stage – from jazz to metal to country to blues. There’s not a bad seat in the house in this intimate music venue. So sit back. Relax. And try to take a rest between standing ovations at the hottest Atlantic City concerts. View ... Borgata Music Box currently has a busy list of concert tours coming to the venue in the next few months. A selection of music's top performers are about to have concerts at Borgata Music Box in Atlantic City. Do not miss some of the concert fever that Borgata Music Box has to offer. Borgata Music Box is one of the best venues that Atlantic City has to offer. Simply browse through the dates ... BoxOfficeTicketSales.com is a ticket marketplace delivering you the access to your favorite events. With over 1,000,000 ticket sold, we are one of the world’s leading independent secondary ticket marketplaces delivering access to the best events. We are not associated with any venue, box office, or sports organization. Prices may be above or ... Borgata Casino Music Box Tickets On Sale! SecureBoxOffice.com specializes in Atlantic City concert tickets, sports tickets, theatre tickets, broadway tickets, and event tickets. Now, the one and only Mandy Moore comes to The Music Box on March 21. Read More. Leave a Comment. concerts, entertainment, events, Mandy Moore, Out at Borgata, the music box. concerts, entertainment, events, Mandy Moore, Out at Borgata, the music box. Feb 20. Get Your Tickets For These Hot Acts Coming to Borgata in March. POSTED BY: Carie York CATEGORY: Entertainment. Enjoy the month of ... Jose Feliciano, who will play the Borgata Music Box December 17, has had a long and varied career and is widely considered the first Latin artist to make the crossover to the English music market. He’s also one of the greatest pop guitarists of all time, being called “the Picasso of his realm.” Borgata Casino: The Music Box: A Beautiful venue to catch a live show - See 2,468 traveler reviews, 267 candid photos, and great deals for Atlantic City, NJ, at Tripadvisor. Borgata Casino Music Box Seating Information Unlike its sister venue—the Borgata Casino Event Center—the Music Box only holds roughly 1,000 seats between 26 rows, making for an exceptionally intimate theater space. View the setup for your event on the next page on the interactive Borgata Music Box seating chart. For assistance navigating ... 애틀랜틱시티, NJ에서 일반 엔터테인먼트일